Right clicking has been disabled on this page.

For security reasons it has been necessary to disable right clicking in some areas of the site.
You can still paste text by pressing either CTRL + V (Windows) or ⌘ + V (Mac).

Click anywhere on this message to make it disappear.

Sex workers say Wix is shutting down their websites

In the past few years, web development platform Wix, which lets users build and host their own sites, has become particularly popular with sex workers for its accessibility and customizable options. But recently, models and escorts have said their pages are being taken down by Wix amid SESTA-FOSTA, the controversial anti-“sex trafficking” law signed last month by President Donald Trump.

One sex worker, Brooke Nichols, shared a screengrab on Tuesday, showing that her site was shut down by Wix “due to Terms of Use violation.”

“According to our Terms of use [sic], you are not allowed to display content which is in a violation of any applicable laws or requirements in your geographical location,” the screengrab reads. “We are obligated to remove such infringing content immediately.” 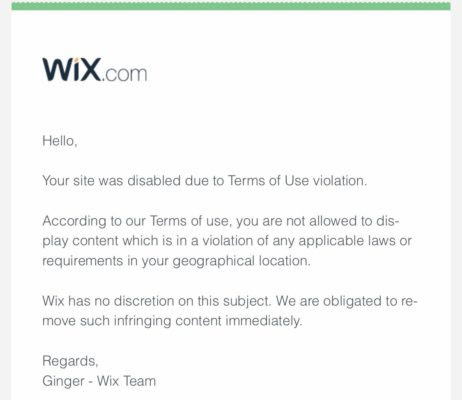 “I was both surprised and expecting it, if that makes sense,” Nichols told the Daily Dot. “So many sites, be they ad boards or industry-specific website designers, had disappeared since FOSTA, so I figured it would hit me eventually.”

Two other sex workers shared similar stories over Twitter about their Wix accounts being targeted. A site formerly hosted by Wix for model Isabell Night simply displays an error message when visited.

“Baby Girls!!” Night tweeted. “If you are on Wix please go take screen shots of your site as fast as you can. I was taken down this morning and (to my knowledge) one of the first.”

Others feared for their own websites or worried that their friends and colleagues’ Wix pages may be taken down soon enough.

Cam model Grace Preston even argued that Wix has “pulled down sites looooong before the law change.” (The Daily Dot reached out to Night, Preston, and Noir, but did not hear back.)

Under Wix’s Terms of Use, the web service asks users to “fully comply with all applicable laws and any other contractual terms which govern your use of the Wix Services (and any related interaction or transaction),” including “specific laws applicable to you or your End Users in any of your geographical locations.” The Daily Dot reached out to Wix about pulling sex worker content but did not receive a response.

It appears, though, that Wix is removing websites and content that could put the service at risk for prosecution under SESTA-FOSTA.. This is because SESTA-FOSTA amends the U.S. Communications Decency Act so websites are legally responsible for content related to “sex trafficking” on their websites and domains.

While there’s a pretty clear distinction between “trafficking” and consensual sex work, the U.S. government doesn’t differentiate between the two under the law, meaning websites are at risk for prosecution if an ad for sex work is deemed as “facilitating” sex trafficking. Out of fear of being sued, Craigslist shut down its personals section before SESTA-FOSTA was even signed, and Reddit began removing several subreddits dedicated to sex work as soon as the law passed in the Senate.

In the meantime, Nichols has advice for sex workers still using Wix: Make backups and move on to a safer provider sooner rather than later. She recommended the sex worker-run service Red Umbrella Hosting for creating a website hosted outside the U.S.

“I wish I knew more avenues for sex workers to be able to build their own sites, but I only know of Cuties Tools, which has a pretty limited interface in my opinion,” Nichols told the Daily Dot. “It’s better than nothing, so I’d advise sex workers on mainstream sites to clone their sites on a more sex worker-friendly platform.”

Nichols said that she’s already working on getting her site back up. But she’s well aware that SESTA-FOSTA is a looming presence in her field.

“I hired a designer to build me an open-source site with a foreign domain, host, and server,” she said. “Not that any of that matters if the government wants to get someone badly enough.”

Ana Valens is a frequent contributor to the Daily Dot's IRL section, covering LGBTQ issues.. Her work has previously appeared in Bitch, the Establishment, Vice's Waypoint, Rolling Stone's Glixel, and the Toast. She lives in Brooklyn, New York.